What is the Maricopa Lapidary Society?

The Maricopa Lapidary Society is a group of people with varied backgrounds and ages, but who share a passion for lapidary. It is an all volunteer non-profit organization that relies on the time and talents of our members.  Rewarding club experiences are made possible by the efforts of volunteers, and we encourage everyone to get involved in helping with activities, such as classes, field trips, displays, or our booth at gem shows.

The Maricopa Lapidary Society (MLS) was founded in 1948 by a small group of dedicated lapidaries. It was Phoenix's second gem and mineral society. 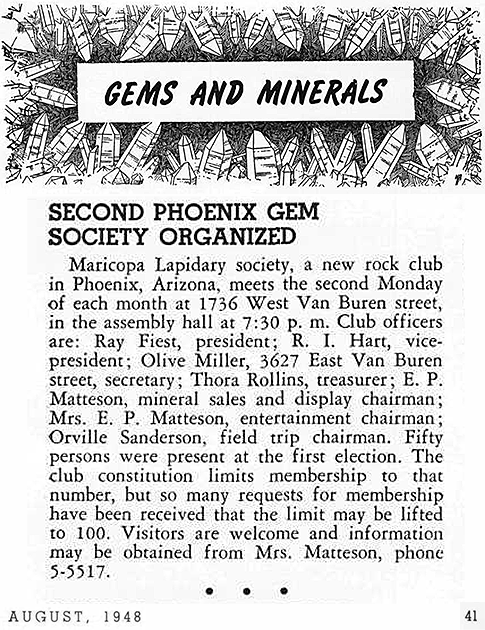 The club supported the Arizona Mining & Mineral Museum and met at the museum until its closure in May 2011. The MLS currently meets at the North Mountain Visitor Center in Phoenix on the first Monday of each month, except in July.

In 1952, the MLS held its first annual gem show at the Phoenix Armory.  This show would be known as the Phoenix Gem and Mineral Show and continued at various locations, such as the Arizona State Fairgrounds and Mesa Centennial Center.

Our meetings are scheduled on the first Monday of each month, except in July. They are held at the North Mountain Visitor Center, 12950 N. 7th Street in Phoenix.